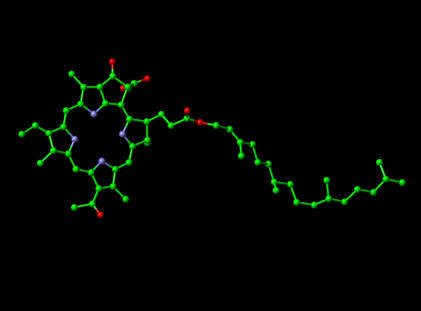 Pheophytin or Pheo is a chlorophyll molecule lacking a central Mg2+ ion which serves as the first electron carrier intermediate in the electron transfer pathway of photosystem II in plants and the photosynthetic reaction center RC P870 found in purple bacteria. In both PS II and RC P870, light drives electrons from the reaction center through pheophytin, which then passes the electrons to either a quinone (QA) in RC P870 or plastoquinone in PS II. Only chlorophyll of the P680 reaction center in photosystem is capable of transferring an electron to pheophytin. The overall mechanisms, roles, and purposes of the pheophytin molecules in the two transport chains are analogous to each other.

In the 1970s, scientists, Karapetyan (1971), Karapetyan and Klimov (1973) and Klimov (1973) performed a series of experiments to prove that it was pheophytin and not plastoquinone that served as the primary electron acceptor in photosystem II. Using several experiments, including electron paramagnetic resonance (EPR), they were led to believe that pheophytin was reducible and therefore potentially the primary electron acceptor between P680 and plastoquinone. This discovery was met with fierce objection since many believed pheophytin to be a byproduct of chlorophyll degradation. Therefore, more testing ensued to prove that pheophytin was indeed the primary election acceptor of PSII, occurring between P680 and plastoquinone. The data that was obtained is as follows:

These observations are all characteristic of photo-conversions of reaction center components.

Pheophytin is the first electron carrier intermediate in the photoreaction center (RC P870) of purple bacteria. Its involvement in this system can be broken down into 5 basic steps. The first step is excitation of the bacteriochlorophylls (Chl)2 or the special pair of chlorophylls. This can be seen in the following reaction.

The third step is the rapid electron movement to the tightly bound menaquinone, QA, which immediately donates the electrons to a second, loosely bound quinine (QB). Two electron transfers convert QB to its reduced form (QBH2).

The fifth and final step involves the filling of the â€œholeâ€ in the special pair by an electron from a heme in cytochrome c. This regenerates the substrates and completes the cycle, allowing for subsequent reactions to take place.

In photosystem II, pheophytin plays a very similar role. It again acts as the first electron carrier intermediate in the photosystem. After P680 becomes excited to P680*, it transfers an electron to pheophytin, which converts the molecule into a negatively charged radical. The negatively charged pheophytin radical quickly passes its extra electron to two consecutive plastoquinone molecules. Eventually, the electrons pass through the cytochrome b6f molecule and leave photosystem II. See the reactions above in the purple bacteria to get a better idea of the actual movement of the electrons through pheophytin and the photosystem in general. The overall scheme is: