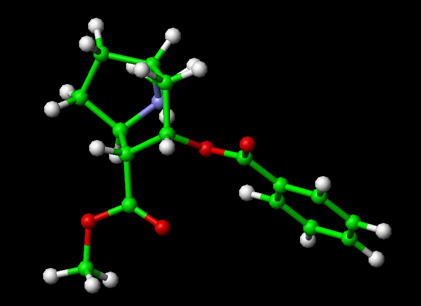 The chemical compound benzene (C6H6) is a colorless, flammable, aromatic hydrocarbon, that is a known carcinogen. It boils at 80.1°C and melts at 5.5°C. Benzene has a heat of vaporization of 44.3 kJ/mol and a heat of fusion of 9.84 kJ/mol. Produced by hydrogen reduction of some allotropes of carbon, or from petroleum, it is used in the creation of drugs, plastics, gasoline, synthetic rubber, napalm and dyes.

Cocain (Methylbenzoylecgonine) is a crystalline tropane alkaloid that is obtained from the leaves of the coca plant. The name comes from "coca" in addition to the alkaloid suffix -ine, forming cocaine. It is both a stimulant of the central nervous system and an appetite suppressant. Specifically, it is a dopamine reuptake inhibitor. It gives a feeling to what has been described as a euphoric sense of happiness and increased energy. It is most often used recreationally for this effect. Because of the way it affects the mesolimbic reward pathway, cocaine is addictive. Nevertheless, cocaine is still used in medicine as a topical anesthetic, even in children, specifically in eye, nose and throat surgery.

Its possession, cultivation, and distribution are illegal for non-medicinal and non-government sanctioned purposes in virtually all parts of the world. Although its free commercialization is illegal and has been severely penalized in virtually all countries, its use worldwide remains widespread in many social, cultural, and personal settings.

For a thousand years, South American indigenous peoples have chewed the coca leaf (Erythroxylum coca), a plant that contains vital nutrients as well as numerous alkaloids, including cocaine. The leaf was, and is, chewed almost universally by some indigenous communitiesâ€”ancient Peruvian mummies have been found with the remains of coca leaves, and pottery from the time period depicts humans, cheeks bulged with the presence of something on which they are chewing.[2] However, it should be noted that there is much evidence that its habitual use has led to negative consequences generally associated with habitual cocaine use today.[3][4] There is also evidence that these cultures used a mixture of coca leaves and saliva as an anesthetic for the performance of trepanation.[5]

When the Spaniards conquered South America, they at first ignored aboriginal claims that the leaf gave them strength and energy, and declared the practice of chewing it the work of the Devil. But after discovering that these claims were true, they legalized and taxed the leaf, taking 10% off the value of each crop. These taxes were for a time the main source of support for the Roman Catholic Church in the region.

Although the stimulant and hunger-suppressant properties of coca had been known for many centuries, the isolation of the cocaine alkaloid was not achieved until 1855 . Many scientists had attempted to isolate cocaine, but none had been successful for two reasons: the knowledge of chemistry required was insufficient at the time, worsened because coca does not grow in Europe and ruins easily during travel. The cocaine alkaloid was first isolated by the German chemist Friedrich Gaedcke in 1855 . Gaedcke named the alkaloid "erythroxyline", and published a description in the journal Archives de Pharmacie.

In 1856, Friedrich WÃhler asked Dr. Carl Scherzer, a scientist aboard the Novara (an Austrian frigate sent by Emperor Franz Joseph to circle the globe), to bring him a large amount of coca leaves from South America. In 1859 , the ship finished its travels and WÃ¶hler received a trunk full of coca. WÃ¶hler passed on the leaves to Albert Niemann, a Ph.D. student at the University of GÃ¶ttingen in Germany, who then developed an improved purification process. Niemann described every step he took to isolte cocaine in his dissertation titled Ãœber eine neue organische Base in den CocablÃ¤ttern (On a New Organic Base in the Coca Leaves), which was published in 1860â€”it earned him his Ph.D. and is now in the British Library. He wrote of the alkaloid's â€œcolourless transparent prismsâ€ and said that, â€œIts solutions have an alkaline reaction, a bitter taste, promote the flow of saliva and leave a peculiar numbness, followed by a sense of cold when applied to the tongue. Niemann named the alkaloid cocaine as with other alkaloids its name carried the suffix (from Latin -ina). The first synthesis and elucidation of the structure of the cocaine molecule was by Richard WillstÃ¤tter in 1898.[7] The synthesis started from tropinone, a related natural product and took five steps.

With the discovery of this new alkaloid, Western medicine was quick to jump upon and exploit the possible uses of this plant.

In 1879, Vassili von Anrep, of the University of WÃ¼rzburg, devised an experiment to demonstrate the analgesic properties of the newly-discovered alkaloid. He prepared two separate jars, one containing a cocaine-salt solution, with the other containing merely salt water. He then submerged a frog's legs into the two jars, one leg in the treatment and one in the control solution, and proceeded to stimulate the legs in several different ways. The leg that had been immersed in the cocaine solution reacted very differently than the leg that had been immersed in salt water.[8]

Carl Koller (a close associate of Sigmund Freud, who would write about cocaine later) experimented with cocaine for ophthalmic usage. In an infamous experiment in 1884 , he experimented upon himself by applying a cocaine solution to his own eye and then pricking it with pins. His findings were presented to the Heidelberg Ophthalmological Society. Also in 1884, Jellinek demonstrated the effects of cocaine as a respiratory system anesthetic. In 1885, William Halsted demonstrated nerve-block anesthesia,[9] and James Corning demonstrated peridural anesthesia.[10] 1898 saw Heinrich Quincke use cocaine for Spinal anaesthesia.

Cocaine in its purest form is a white, pearly product. Cocaine appearing in powder form is a salt, typically cocaine hydrochloride (CAS 53-21-4). Street market cocaine is frequently adulterated with various powdery fillers to increase its weight; the substances most commonly used in this process are baking soda; sugars, such as lactose, dextrose, inositol, and mannitol; and local anesthetics, such as lidocaine or benzocaine, which mimic or add to cocaine's numbing effect on mucous membranes. Cocaine may also be "cut" with other stimulants such as methamphetamine.[14] Adulterated cocaine is often a white, off-white or pinkish powder.

The color of cocaine depends upon several factors including the origin of the cocaine used, the method of preparation with ammonia or baking soda and the presence of impurities, but will generally range from white to a yellowish cream to a light brown. Its texture will also depend on the adulterants, origin and processing of the powdered cocaine, and the method of converting the base. It ranges from a crumbly texture, sometimes extremely oily, to a hard, almost crystalline nature.

The pharmacodynamics of cocaine involve the complex relationships of neurotransmitters (inhibiting monoamine uptake in rats with ratios of about: Serotonin:Dopamine = 2:3, Serotonin:Norepinephrine = 2:5[22]) The most extensively studied effect of cocaine on the central nervous system is the blockage of the dopamine transporter protein. Dopamine transmitter released during neural signaling is normally recycled via the transporter; i.e., the transporter binds the transmitter and pumps it out of the synaptic cleft back into the pre-synaptic neuron, where it is taken up into storage vesicles. Cocaine binds tightly at the dopamine transporter forming a complex that blocks the transporter's function. The dopamine transporter can no longer perform its reuptake function, and thus dopamine accumulates in the extracellular space (synaptic cleft). This results in an enhanced and prolonged post-synaptic effect of dopaminergic signalling at dopamine receptors on the receiving neuron. Prolonged exposure to cocaine, as occurs with habitual use, leads to homeostatic dysregulation of normal (i.e. without cocaine) dopaminergic signaling via downregulation of dopamine receptors and enhanced signal transduction. The decreased dopaminergic signalling after chronic cocaine use may contribute to depressive mood disorders and sensitize this important brain reward circuit to the reinforcing effects of cocaine (e.g. enhanced dopaminergic signalling only when cocaine is self-administered). This sensitization contributes to the intractable nature of addiction and relapse.

Dopamine-rich brain regions such as the ventral tegmental area, nucleus accumbens, and prefrontal cortex are frequent targets of cocaine addiction research. Of particular interest is the pathway consisting of dopaminergic neurons originating in the ventral tegmental area that terminate in the nucleus accumbens. This projection may function as a "reward center", in that it seems to show activation in response to drugs of abuse like cocaine in addition to natural rewards like food or sex.[23] While the precise role of dopamine in the subjective experience of reward is highly controversial among neuroscientists, the release of dopamine in the nucleus accumbens is widely considered to be at least partially responsible for cocaine's rewarding effects. This hypothesis is largely based on laboratory data involving rats that are trained to self-administer cocaine. If dopamine antagonists are infused directly into the nucleus accumbens, well-trained rats self-administering cocaine will undergo extinction (i.e. initially increase responding only to stop completely) thereby indicating that cocaine is no longer reinforcing (i.e. rewarding) the drug-seeking behavior.

Cocaine's effects on serotonin show across multiple serotonin receptors, and is shown to inhibit the re-uptake of 5-HT3 specifically as an important contributor to the effects of cocaine. The overabundance of 5-HT3 receptors in cocaine conditioned rats display this trait, however the exact effect of 5-HT3 in this process is unclear. [24] The 5-HT2 receptor (particularly the subtypes 5-HT2AR, 5-HT2BR and 5-HT2CR) show influence in the evocation of hyperactivity displayed in cocaine use. [25]. Sigma receptors are effected by cocaine, as cocaine functions as a sigma ligand agonist.[26] Further specific receptors it has been demonstrated to function on are NMDA and the D1 dopamine receptor. [27]

Cocaine also blocks sodium channels, thereby interfering with the propagation of action potentials; thus, like lignocaine and novocaine, it acts as a local anesthetic. Cocaine also causes vasoconstriction, thus reducing bleeding during minor surgical procedures. The locomotor enhancing properties of cocaine may be attributable to its enhancement of dopaminergic transmission from the substantia nigra. Recent research points to an important role of circadian mechanisms[28] and clock genes[29] in behavioral actions of cocaine.

Because nicotine increases the levels of dopamine in the brain, many cocaine users find that consumption of tobacco products during cocaine use enhances the euphoria. This, however, may have undesirable consequences, such as uncontrollable chain smoking during cocaine use (even users who do not normally smoke cigarettes have been known to chain smoke when using cocaine), in addition to the detrimental health effects and the additional strain on the cardiovascular system caused by tobacco.

In addition to irritability, mood disturbances, restlessness, paranoia, and auditory hallucinations, crack can cause several dangerous physical conditions. It can lead to disturbances in heart rhythm and heart attacks, as well as chest pains or even respiratory failure. In addition, strokes, seizures and headaches are common in heavy users.

Cocaine can often cause reduced food intake, many chronic users lose their appetite and can experience severe malnourishment and significant weight loss.

Cocaine is extensively metabolized, primarily in the liver, with only about 1% excreted unchanged in the urine. The metabolism is dominated by hydrolytic ester cleavage, so the eliminated metabolites consist mostly of benzoylecgonine, the major metabolite, and in lesser amounts ecgonine methyl ester and ecgonine.

If taken with alcohol, cocaine combines with the ethanol in the liver to form cocaethylene, which is bot more euphorigenic and some studies suggest a higher cardiovascular toxicity than cocaine by itself It is precisely this characteristic that has prompted heavily inebriated persons, since the early 20th century, to snort cocaine to relieve them of the depressive effects of alcohol abuse.

Depending on liver and kidney function, cocaine metabolites are detectable in urine. Benzoylecgonine can be detected in urine within four hours after cocaine intake and remains detectable in concentrations greater than 150 ng/ml typically for up to eight days after cocaine is used. Detection of accumulation of cocaine metabolites in hair is possible in regular users until the sections of hair grown during use are cut or fall out.