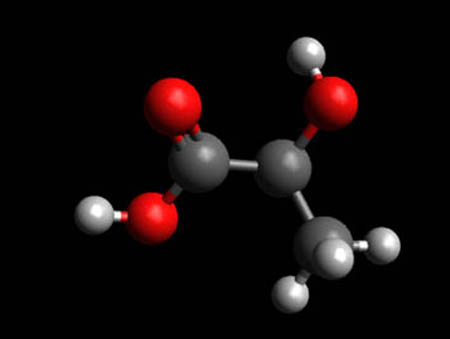 To View the Lactic Acid Molecule in 3D using Jsmol

Lactic acid is an organic compound with the formula (CH3CH(OH)CO2H) C₃H₆O₃. In its solid state, it is white and water-soluble. In its liquid state, it is colorless. It is produced both naturally and synthetically. With a hydroxyl group adjacent to the carboxyl group, lactic acid is classified as an alpha-hydroxy acid(AHA). In the form of its conjugate base called lactate.

Lactic acid was isolated for the first time by the Swedish chemist Carl Wilhelm Scheele in 1780 from sour milk. The name reflects the lact- combining form derived from the Latin word for milk. In 1808, Jöns Jacob Berzelius discovered that lactic acid (actually L-lactate) also is produced in muscles during exertion.  Its structure was established by Johannes Wislicenus in 1873.

In 1856, Louis Pasteur discovered Lactobacillus and its role in the making of lactic acid. Lactic acid started to be produced commercially by the German pharmacy Boehringer Ingelheim in 1895.

The products of this process are carbon dioxide and water, but the energy transferred is used to break bonds in ADP as the third phosphate group is added to form ATP (adenosine triphosphate), by substrate-level phosphorylation, NADH and FADH2.

During power exercises such as aerobic exericse, the rate of demand for energy is high and oxygen availability decreases. When this occurs glucose is broken down and oxidized to pyruvate, and lactate is then produced from the pyruvate faster than the body can process it, causing lactate concentrations to rise. The production of lactate is beneficial for NAD+ regeneration (pyruvate is reduced to lactate while NADH is oxidized to NAD+), which is used up in oxidation of glyceraldehyde 3-phosphate during production of pyruvate from glucose, and this ensures that energy production is maintained and exercise can continue. (During intense exercise, the respiratory chain cannot keep up with the amount of hydrogen ions that join to form NADH, and cannot regenerate NAD+quickly enough.) .

The formula for sugar converstion to lactate is:

The resulting lactate can be used in two ways:

However, lactate is continually formed even at rest and during moderate exercise. Some causes of this are metabolism in red blood cells that lack mitochondria, and limitations resulting from the enzyme activity that occurs in muscle fibers having a high glycolytic capacity.

During intense exercise, there may not be enough oxygen available to complete the process, so a substance called lactate is made. Althugh your body can convert this lactate to energy without using oxygen,  lactic acid can build up in your bloodstream faster than you can burn it off. The point when lactic acid starts to build up is called the "lactate threshold."

In homolactic fermentation, one molecule of glucose is ultimately converted to two molecules of lactic acid.

Heterolactic fermentation, in contrast, yields carbon dioxide and ethanol in addition to lactic acid, in a process called the phosphoketolase pathway.[1]

Glucose is the major fuel for the brain. However recently the role of lactate production in the brain has come to the forefront.

"...For many decades, lactate production in the brain was viewed as a consequence of inadequate oxygen delivery, disruption of oxidative metabolism, or mismatch between glycolytic and oxidative rates (Siesjö, 1978), but more recently, the conceptual role of lactate metabolism and function in the normal brain have undergone major changes, shifting from developmental fuel and glycolytic waste product to include its use as a supplemental fuel and signaling molecule. Starting in the 1970s to 1980s studies carried out in different laboratories with diverse experimental interests related to brain function brought attention to upregulation of glycolysis, lactate production, lactate release into the blood, the possibility of lactate shuttling among cell types within the brain, lactate fueling adult brain during exercise, and roles of lactate in the regulation of blood flow; some of these topics are controversial and highly debated. .." see: Brain lactate metabolism: the discoveries and the controversies

Lactic acid is found primarily in sour milk products, such as koumiss, laban, yogurt, kefir, and some cottage cheeses. The casein in fermented milk is coagulated (curdled) by lactic acid. Lactic acid is also responsible for the sour flavor of sourdough bread.

In beer brewing some styles of beer (sour beer) purposely contain lactic acid. Most commonly this is produced naturally by various strains of bacteria. These bacteria ferment sugars into acids, unlike yeast, which ferment sugar into ethanol. One such style are Belgian Lambics. After cooling the wort, yeast and bacteria are allowed to “fall” into the open fermenters. Most brewers of more common beer styles would ensure no such bacteria are allowed to enter the fermenter. Other sour styles of beer include Berliner weisse, Flanders red and American wild ale.

Lactic acid is synthesized as a part of general metabolism. It can then be used in metabolism or excreted by the body. Lactic acid associated with lactose intolerance is produced when bacteria in the colon ferment lactose that wasn't digested in the small intestine. The result of this fermentation is release of gases, including methane, hydrogen and carbon dioxide which are responsible for the symptoms associated with lactose intolerance, such as abdominal pain, bloating, gas and diarrhea.

See Also: What is an Acid? What is a Base? What is pH?